I used to be a huge prepper. Food prepper, not the End of Days kind of prepper.

I initially got into this practice because I was working early, you know when you get to work while people are still waking up because you are much fresher in the morning? I’M ONE OF THOSE. Working late? Ugh, yuck. I prepped my meals so that I wasn’t going to the food trucks too often (however, Philadelphia has THE best food trucks!) and saving money. My normal commutes while living in the city were an hour-ish whether it was by train or el/bus, so I wasn’t getting in till after 6. Getting dinner ready, eating it, do a few things, work out… the getting dinner ready part was what I wanted to eliminate Monday through Thursday.

When I moved out of the city my commute and hours became drastically different. I became part of the large population that puts in a several hour round trip commute and taking care of myself, with healthy meals, became a huge challenge with such limited time. So, I had to get more creative with my food prepping to make my Monday through Friday as efficient as possible. I couldn’t waste time in the mornings or evenings and I had to master eating a sliced apple while driving. I didn’t know this skill until I embarked on this commute.

SO, I’d like to go over my prep tips and things, because you just never know who else is enduring such a commute or work several jobs and have limited time for themselves.

Breakfast really is important and other than a delicious, piping hot cup of coffee it is important to get in your fruits and veggies. Thank God for smoothies!

This prep is so simple and you only need to dedicate 30ish minutes to it!

I just did this last weekend, so my fruit is fresh; however, frozen fruit is great to because it’s available all year round.

After you figure out your ingredients, get your stuff, clean it/slice it, and create your work station.

Take a sandwich baggy and stick in a handful of each ingredient. In this case, I had a handful of spinach (a large handful), strawberries, blueberries and blackberries. What’s not shown is the watermelon I sliced. I have that in a huge tupperware container and pull that out each morning as I plop this into the Vitamix.

I will prep enough for a month’s worth of smoothies. I also vary the bags and some others I prepped previously were cantaloupe, watermelon and mango. Some are just banana and kale. I switch it up. I also make sure that if I want to add any protein, spirulina, maca, or wheatgrass powder that they are handy. Not all of my ingredients will be frozen, but they will be prepped in some way.

There are times when I’ve added carrots and I do that buy cooking them in coconut oil and keeping them in the fridge. Beets I will peel and slice, but I will not cook them. I prefer raw beets in my smoothies. Depending on how I’m feeling, I will roast or boil the sweet potato, dice it, keep it in the fridge. I do prefer to pre-clean and de-stem kale, this makes it much easier during the weekday mornings.

Again, you need to devote some time to this, but in the long run it really saves you a lot of time during the week when you’re on the run! And if you happen to get home really really late and you have no energy and nothing ready to eat, drink a smoothie. OR make it more meal-like and create yourself a smoothie bowl! 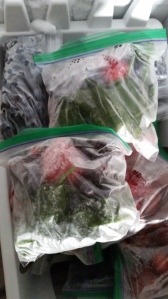 (it’s humid right now and my deep freeze is in the garage!)