I had Saturday all planned out and what I was going to sit and post yesterday evening, but then WordPress kept saying I was typing my password too fast. I never had that happen before until I recently changed it. (Long story short, some coconut oil got into my phone’s speaker, got a replacement phone from insurance. Replacement phone was a refurbished piece of crap that died within hours of activation. Then I got a brand spanking new phone and need to change my passwords for EVERYTHING because I can’t turn on replacement phone #1 and clear it).

If you haven’t had the chance to see Baby Driver, I highly suggest it. It was a great film and I haven’t been so wow’d by a movie soundtrack in ages. La La Land was a musical, so that doesn’t count. Yesterday the Little Sister and I also saw Atomic Blonde, which also had an awesome soundtrack. We highly enjoyed the movie and she said that we’re on a great streak for awesome movies. I agree. I saw The Big Sick on my own and cried. It was so beautiful and hilarious. It also hit me in a spot because I have friends who have feared the I’m Dating A White Girl/Guy Conversation with their parents.

It’s been awhile since I wrote one of these kinds of posts. So, let me tell you how I thought the Ed Sheeran’s guest appearance in Game of Thrones was… UGH. I understand they needed someone to sing, but I just don’t like Ed Sheeran. I hope we don’t see anymore of him. I’m just so over Ed Sheeran. Moving on.

Funeral by Arcade Fire is one of my all time favorite albums and until their second album, one of my favorite bands. I liked Neon Bible, but just not as much as I liked Funeral. I liked some songs of The Suburbs and the singles I heard from Reflektor just didn’t do anything for me. I can easily pass up listening to the title track of their new album, Everything Now, on the radio; however, Everything Now is SUCH a good album. I’m so glad they finally made another album that I can enjoy!

I’m currently trying to decide between buying tickets for Ben Folds (& his piano) or acoustic Ray LaMontagne. Ben is an absolute favorite and I’ve seen him so many times… BUT ACOUSTIC RAY LAMONTAGNE. It’s been a looooong time since I’ve seen that.

Yesterday the Little Sister and I made our way to our local brewery for a food truck competition. Blue Earl Brewing Company is practically in my backyard and would be a good 20 minute walk or maybe 2 minute(?) drive. I have a bad habit of going in and having a few with friends to enjoy whatever their recent release is and buying a few bottles that still remain unopened. Unfortunately, our favorite food truck Mojo Loco didn’t win. We walked up and down the row of trucks three times reading the menus to decide on where we’d eat and when it came down to it, we went with our tried and true favorite. All the others had your typical American fair of fried foods and for some reason, it seems that Delawareans can’t get enough Philly cheesesteaks. I don’t look for that in a food truck. I had delicious fish tacos and the Little Sister had the ‘best ahi tuna burger she ever had’ and we shared Mexican crab fries. 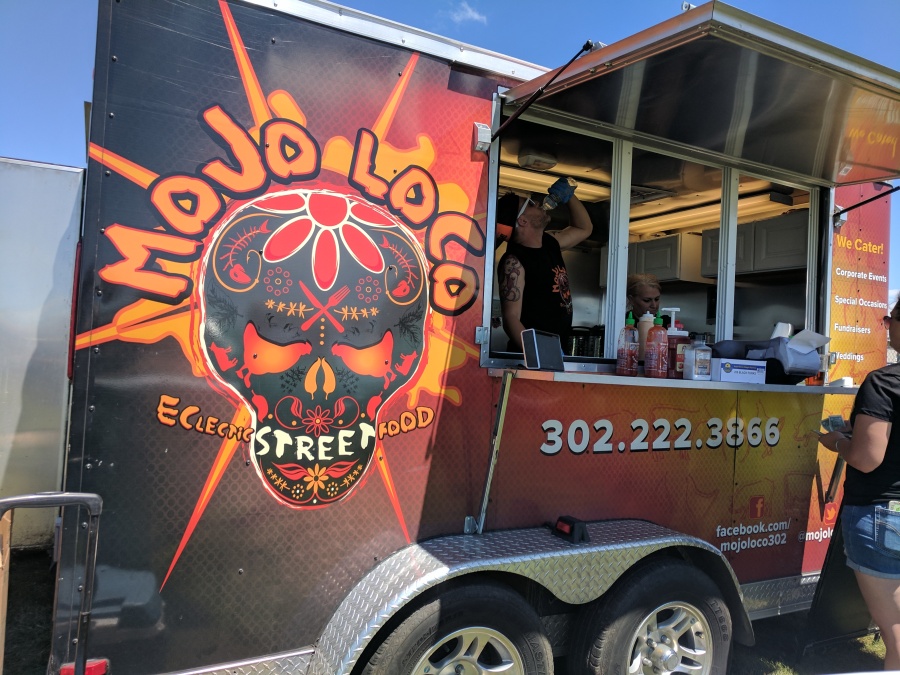 I needed something sweet and had a spare beer on hand to make some Beer Brownies from Dessert for Two. I recently found this blog and it’s just genius. Especially since I posted about my newly understood sugar addiction and have a hankering something sweet, but won’t settle for something store bought. This is just perfect!

I’ve been keeping a notebook of ideas this year and am currently looking into getting an business license for my crafting. First, I need to see through with a different licensing exam I’ve been studying for. So many things to do in life, how do we find the time for it all?

I bought several heads of cauliflower and thought, ‘hey I could rice this with my ninja.’ Turns out, the blender is too powerful when pulsed so get cauliflower rice. I also added to much water when cooking it last week and ended up making what my friend Gen called potat-noes. Are those a thing?

What have you been up to? What movies have you seen recently? Any new tunes? Any cauliflower ricing advice?