Actually, I had no idea what the slogan was until I Googled it. However, I greatly appreciate this company and their slogan. I wish I went somewhere that sold their product(s).

Houston is pretty awesome. Like any other city or town, it’s what you make of it. I enjoyed my visit and went to as many highly recommended places as I could! My friend Sarah, who is a Houstonian, sent me a list of recommendation of places to go while there. Unfortunately, we didn’t get to cross paths. So I guess I’ll have to go back to Texas!

The purpose of my visit was to attend one of my best friend’s wedding party. She’s doing her post-doc work in Houston and she rented a house in Jamaica Beach to have a party.

First off, Prima Pasta catered her party and provided delicious Italian and Persian food. It was SUCH good food. Here’s a screen shot of my snap I sent the Little Sister about my dinner: 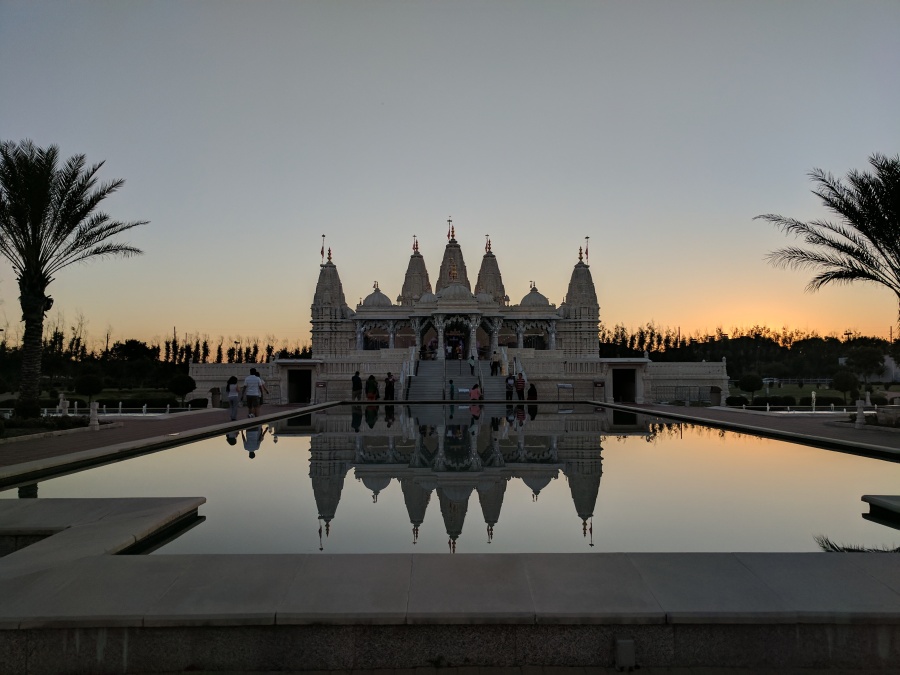 I visited BAPS Shri Swaminarayan Mandir and happened to be present for their Friday evening prayer. This structure is absolutely gorgeous. I was in awe of all the marble and sandstone that was used. They had a little exhibition going on regarding India’s contributions to today’s world. While I’d agree to some of these contributions, I’d also refer to it as the Museum of Alternative Facts. Who really discovered the art of eaves dropping???

I had the pleasure of visiting Phoenicia Specialty Foods and eating at their cafe. I wish there was one of these on the east coast. After living in France, while I LOVE French food, Middle Eastern dishes had become a staple in my diet. When push comes to shove, I’ll choose a Middle Eastern place over another because of how much I love the food. At least I walked away with my favorite Persian candy:

At about midnight on the way to the airport to pick up my friend’s sister we stopped by Katz’s Deli. I got the Famous Cheesecake Milk Shake, which includes an ENTIRE slice of cheesecake and I opted for strawberry ice cream. I don’t know about you, but adding an entire slice of cheesecake is the ONLY way to enjoy a milkshake from now on.

We drove to Galveston for the party and I must say, Galveston stole my heart. I didn’t get to visit much of the island, but I look forward to going back and checking it all out. I spent about 3-4 hours in a Starbucks chatting to a local, Robert. I only meant to stop in before walking around all the strip malls, but Robert and I started chatted and had too much coffee. It’s great making friends!

On the way back to Houston we stopped by Kemah Boardwalk. It was neat. Not the same boardwalks I grew up knowing.

I got to try the Mexican Vanilla ice cream from Amy’s. Funny enough, I’m not the biggest ice cream fan; but, if you tell me this is a artisan ice cream place or a specialty dessert or whatever, I’ll try it in a heart beat. Those ice creams are always better! God bless the man who waited on us. It was 11:50pm and he watched a 5′ woman battle a 5’9 woman regarding who pays for ice cream. I won. I’m 5’9.
I did have an opportunity to borrow my friend’s car and get out a little bit. I went to Common Bond Cafe and Bakery to enjoy an amazing lavender latte and a fig and prosciutto tartine. The service there was amazing, their attention to detail in ordering food was something I’ve never experienced before, and I wish I could have went there a couple times during my visit!

Sticking to coffee, I also went to Black Hole Coffee and ordered myself an iced coffee nitro. Very good!

For some Texan BBQ I went to The Pit Room. I really really had to refrain from ordering a lot of meat. I would have walked away with a whole tray of meat. They were kind enough to allow me to order several kinds of meat to meet the 1/2lb. price/serving. It was a really awesome casual atmosphere with old country tunes playing in the background. There was a roll of paper towels at each table and you had your extra condiments bar to customize your meal. By the time I got there all the sausage was gone, so I had some pulled pork, brisket, and chicken. I also got a chicken taco. That was the best taco I ever had. I used their Homemade BBQ sauce on the brisket and their Coffee Bourbon BBQ sauce on the pulled pork. This meal was one of my all time favorites. Seriously. Could these peeps open up a place in Delaware?

I went to the Ron Mueck exhibit at the Museum of Fine Arts, Houston. It was a great exhibit and I enjoyed walking through the museum. Because the museum is located at an intersection, there’s another building across the street and you get there by going through an underground tunnel. I wasn’t sure if this was the tunnel until I asked an attendant who said, “yes, just walk towards the light.” I couldn’t help but think, ‘this isn’t the statement I expected’ and, ‘maybe we will walk towards our own designed light tunnels at the end of life?’ If so, this isn’t too far off from what I’d walk through. 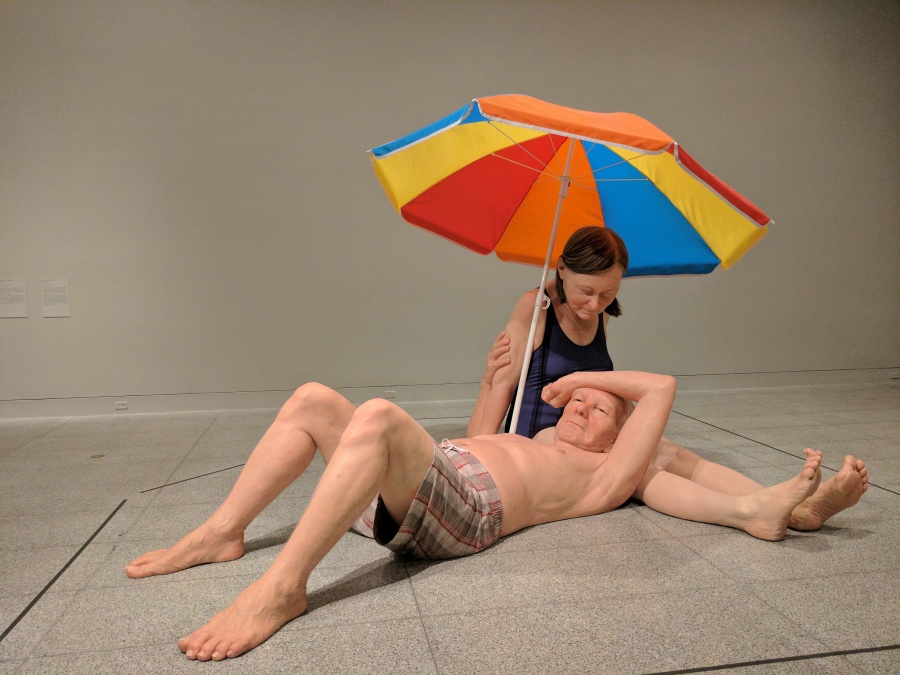 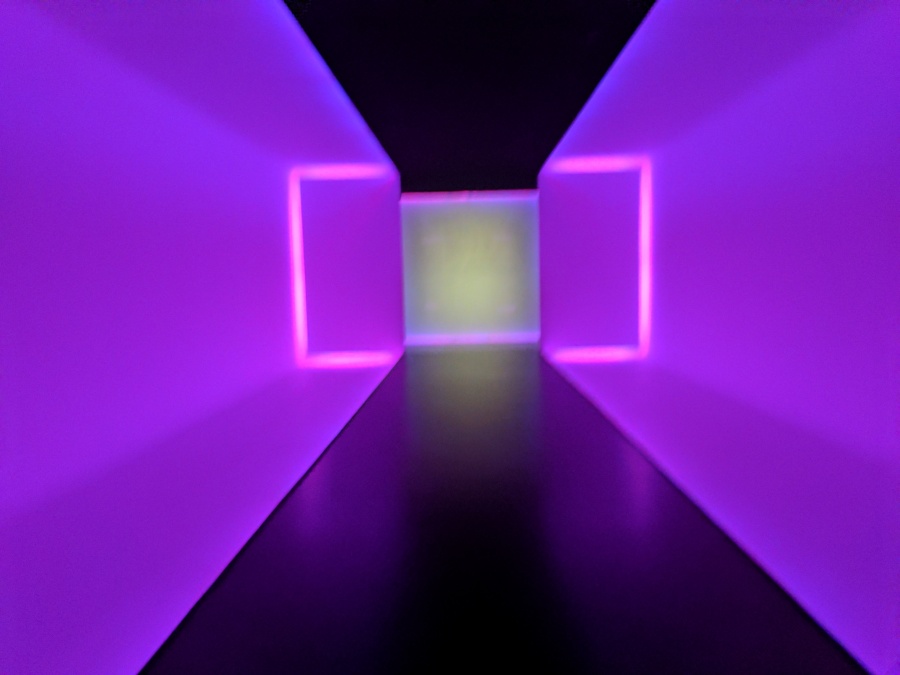 Then, we also had dinner at Chuy’s. I got the chuychanga, a margarita, and an abundance of chips. It was such a good dinner. I understand this is a Texan chain restaurant, but it was sooo delicious!

Welp, that concludes my points of destination throughout my trip! I can’t wait to go back and revisit a few and try a lot more. Have you ever been to Houston, or Texas?

One thought on “Houston: The City With No Limits”

The first photo was my first photo of 2009 that started my photo a day challenge. We didn't have the smart phones with awesome cameras today, so we were connecting out digital cameras to our laptops to get that one photo uploaded 😂 The next one was taken over the weekend on my phone. Just like everyone else, in ten years time there were lots of changes and experiences in life. More importantly, over the last 10 years I learned even more about love: I grew up knowing the difference between unconditional & conditional love in my dysfunctional family. I grew up knowing how quickly love turns to hate and bitterness. I had all of these examples. But through a lot of prayer I learned how love can change the heart in so many unidentifiable ways. I learned that by default I love deep & need to guard my heart. I watched a bitter old woman turn into one of the sweetest people I've ever known. My love for my brother was challenged all the time due to his addiction. For years I was convinced that when my dad died I'd be relieved. Instead, it was a loss I grieved because I prayed for my heart to change. Through life's struggles & losses, I learned how much my friends love. At a time when I had no interest in existing anymore, I was shown love from people who had no idea how I was feeling. I pushed through struggles that no one knew about. When I decided I needed to speak up, I also learned about how love reveals itself with transparency. I learned how to love despite betrayal, despite growing apart, despite lies, & so many other things. For a long time it was hard to wrap my head around how there could be such a loving God. Especially with the abuse I grew up with from a parent, who you thought should love and protect. But there are people in our lives that exist to demonstrate unconditional love & provide that example of a loving God. Whether they know it or not, whether they believe in God or not... they were used as an example. Because of them, I'm still alive & sharing this. Because of God and the people He chose, I was able to learn these lessons & will continue to learn these lessons about love. So, that's what I have to say about the last 10 years.
#septanapsarethebestnaps